The Midcoast Maine 300k is a new route for NER, entirely within Maine!

This route offers a mix of postcard Maine coastline, coastal towns, rural country roads, and farmland. By the numbers there is not a lot of climbing, but it punches a little above its weight with rollers and hills concentrated in sections throughout the course. From the start at Payson Park at Back Cove in Portland, the route heads northeast along Casco Bay toward Yarmouth, passing by Eartha, the word’s largest rotating globe (according to Wikipedia) located at the former headquarters of DeLorme. Having acquired DeLorme in 2016, Garmin now has an office at this location. Garmin users who still have a stack of DeLorme “gazetteers” with loose pages will appreciate the parallel; perhaps with some wistfulness. Continuing up the coast, the route skirts the shopping destination of Freeport to the east, along rolling rural roads to Brunswick, home of Bowdoin College, at mile 28, with the route passing through the town center. The route then crosses the Androscoggin River on the bike path and begins a half circuit of the Merrymeeting Wheelers’ Merrymeeting Bay Loop route, on occasionally rolling sections with elevated views of the bay. The route passes through Bowdoinham to the second control at mile 48 in Richmond. There is also a spigot on the outside of Annabella’s Café and Bakery for filling water bottles and a park across the street with picnic tables and a gazebo. The control is either a vendor control at Annabella’s or photo control at the gazebo.

The route crosses the Kennebec River with a nice view of Richmond from the bridge if you care to look over your right shoulder. Next up are more rural sections through Dresden and Alna, including a brief dirt section at mile 60 which is prone to washboard.

At mile 64 the route turns northward and around the west side of Damariscotta Lake. This nine mile section has narrow shoulders but typically has light traffic. Morse’s Sauerkraut, cite of the third control, a local destination famous for it various fermented offerings, is closed on Sundays, so this will be an info/photo control.

The section of the course from mile 89 in Waldoboro to mile 128 outside Damariscotta will see more traffic than the rest of the route, more so on a holiday weekend. Some sections also have narrow shoulders; a tradeoff for the terrain and views. Route 32 from Waldoboro to Route 110 north of Pemaquid Point has varied terrain and vistas, including rolling hills, farmland, coastline, and the small coastal village of Round Pond in Bristol. Pemaquid Point, site of the fourth control at mile 111, is a signature point of the ride with its iconic lighthouse and jagged coast. Get your card signed by the attendant at the entrance or take a photo/GPS track. 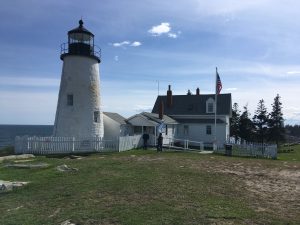 Heading back up Route 130, the route continues north toward Damariscotta at mile 125. This section has wide shoulders with the exception of a two mile section after it merges with Route 129 just south of the iconic “Down East” coastal town of Damariscotta. After passing through the town center, the route crosses back over to the west/non-ocean side of Route 1. From here to Bath, the route is rural aside from flirting with Route 1 in Wiscasset and Woolwich. Highlights on this section are Sheepscott and the Sheepscott River, the coastal town of Wiscasset, the section along the Kennebec River with views of the Bath Bridge, and views from the bridge itself, which riders will cross heading into Bath, site of the fifth control at a Cumberland Farms. The route continues along Old Brunswick Road, aka Old Bath Rd when going the opposite direction to Brunswick, including a three mile section on the bike path along the Androscoggin River. The route rejoins the outgoing section briefly before separating just outside of town for a six mile section of farmland, expansive views, and increasingly rolling terrain as it gets closer to Freeport. The route rejoins the outbound section near Freeport for the remainder of the ride, with the exception of the additional 1.5 miles to the finish (at a private home; please be mindful of neighbors) after passing the start location.